Begin your English self-drive journey in the city that lies in Manchester, the Industrial Revolution’s heartland, where old working canals now sparkle with quayside cafés and contemporary museums. Manchester is easy to walk around on foot and offers copious shopping opportunities from designer, boutique and department stores. There are also a number of fascinating museums and art galleries including the Whitworth Art Gallery – voted Museum of the Year 2015.

Don’t miss the Science and Industry Museum (MOSI), which takes you on a journey through Manchester's heritage with sights, sounds and even smells. Elsewhere, art lovers will be won over by the fine art and costumes on display at Manchester Art Gallery and the stunning architecture of Manchester Town Hall.

An hour drive in your rental car along the M56 and find yourself at the Roman city of Chester in northwest England. Enjoy the day soaking in Roman history while you stroll through Chester city walls that were first constructed by the Romans in 70 AD, and appreciate the medieval atmosphere that this town has been preserving for many years.

Travel an hour up north from Chester in your hire car to Lancaster on M56 and M6. The county of Lancashire is famous for its cheese, Lancaster Hotpot, the beautiful Forest of Bowland, the Pendle witches, Lancaster Castle. Lancaster Castle is known as the ‘Queen’s only castle in the north’ filled with history that dates back to 1558. Nowadays, Lancaster Castle welcomes visitors of all ages for daily tours and special events.

Continue north on the M6 to Junction 36/A590 and follow the signs for Levens Hall and Gardens in Cumbria. With over 100 topiary pieces on show, many in the shape of chess pieces, a wander around Levens Hall is like stepping into Alice in Wonderland. The famous topiary gardens were designed by Monsieur Beaumont in 1694 and are the oldest and most extensive in world, with some designs reaching over nine metres high.

Tour the Lake District National Park by car which gives you the chance to see all of the highlights. The glistening lakes and towering mountains of England’s biggest National Park have inspired artists, poets and writers for generations. A key place to visit when traveling with children include The World of Beatrix Potter, which tells the story of Beatrix Potter, the famous children’s author and illustrator, and features the characters she created from Peter Rabbit to Jemima Puddle-Duck.

Your next adventure will continue in a unique village known as Grasmere. Take some time to explore the charming shops, tearooms and art galleries as well as the churchyard where William Wordsworth is buried. Don’t leave without trying Sarah Nelson’s Grasmere Gingerbread – the 19th century recipe for this crumbly treat is still top secret. Travel onwards to Alston on the A686, named ‘One of the Greatest Drives in Britain’ owing to the dramatic scenery of the Pennines encountered along its route.

Leaving Alston follow the signs for Vindolanda, the journey will take close to 2 hours. An extensive Roman museum located on a former ancient fort just south of Hadrian’s Wall, Vindolanda is a live archaeological site with excavations running in the week during certain months. Excavations aside, the museum is packed full of fascinating Roman artefacts, including Vindolanda’s precious writing tablets – the oldest surviving handwritten documents in Britain.

Departing Alnwick drive south to the city of Durham, visit Durham Cathedral and Castle, a UNESCO World Heritage Site founded in the 11th century. Dominating the city’s skyline, it has starred in Harry Potter films and is one of Europe’s most impressive examples of Romanesque architecture. Make a stop at the Undercroft Restaurant beneath the cathedral before you spend the rest of the morning exploring this charming town.

Hop back into your rental car and depart Durham via the A1M south and an hour and a half later you fill find yourself in the city of York. Venture off to the magnificent York Minster, one of the largest gothic cathedrals in Northern Europe, to admire its tennis court-sized stained glass window, and discover 2000 years of history at the Undercroft – a state-of-the-art attraction housed in chambers beneath the Minster. Vikings invaded the city more than 1000 years ago and you can experience what life was like back then at Jorvik Viking Centre, discovering the sights, sounds and smells on a journey through a Viking village. Only short drive away and you can refuel with afternoon tea at the immensely popular Bettys tearoom, don’t forget to try a Yorkshire Fat Rascal – a plump, fruity scone hand-decorated with a glacé cherry and almond face.

When you have finished exploring York travel south towards Chesterfield, and arrive at Chatsworth. Chatsworth is one of the UK’s most impressive stately homes with vast gardens and parkland rolling as far as the eye can see. Home to the Duke and Duchess of Devonshire, it has been passed down through 16 generations of the Cavendish family, while the house’s elaborate architecture, interiors and one of Europe's most significant art collections have been evolving for five centuries. As you finish your stay in Chatsworth you may drive back to Manchester for your onward journey on your holiday. 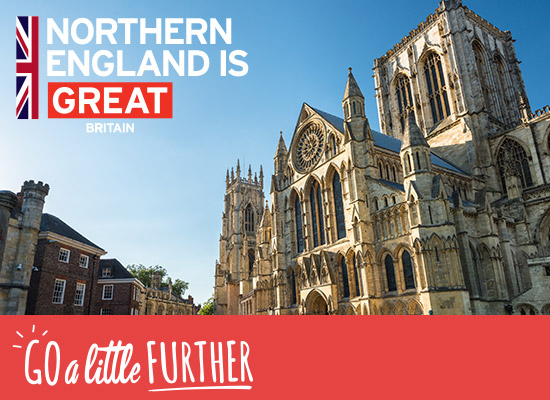 DriveAway want to give you the freedom to explore the quaint countrysides, and major landmarks of the United Kingdom. If you would like to book car hire in the UK, simply use our online booking engine above or contact our friendly reservations staff.