The Shark Bay-Ningaloo coast is one of few places on Earth where you can visit two World Heritage listed treasures in one self-drive adventure. This trail reveals the natural wonders that put the region on the UNESCO world map – from the biggest fringing reef, to the largest and oldest living fossils on the planet. The best time to take this journey from Perth is March to November. And if you would like to swim with the largest fish on the planet, the gentle Whale Shark, they are best seen at Ningaloo Reef from mid-March through to the end of July.

Indian Ocean Drive leads you to one of the most unique landscapes on Earth, the Pinnacles Desert of Nambung National Park. Cruise, kayak, walk, climb or abseil Kalbarri’s 400-million-year-old river gorges. Or take in the region’s extraordinary beauty, spring wildflowers and rock formations, including iconic Nature’s Window, from the park’s lookouts. Get a glimpse of life on Earth over 3,500 million years ago at the Hamelin Pool Stromatolites – the largest and oldest living fossils on the planet. Take a stroll on Shell Beach – one of the few places in the world where you’ll see a beach made entirely of billions of tiny shells. Monkey Mia is one of the world’s top spots for dolphin encounters. Wild dolphins have visited virtually every day since the early 1960s.

Take a detour by 4WD to Quobba, Red Bluff, 3Mile Camp and Gnaraloo to experience the southern end of World Heritage listed Ningaloo Reef. In the calm, sheltered waters of Coral Bay, you’re just a short snorkel from Ningaloo’s coral gardens – home to 500 species of fish and 300 varieties of coral.

From mid March to July each year, Exmouth is one of the best places in the world to take a swim with the largest fish in the ocean – the gentle whale shark. Take a wildlife cruise (seasonal) or self-guided bushwalk up the rugged red canyon of Yardie Creek.

Visit the Ningaloo Centre where they have an aquarium and a variety of different events on, so be sure to check their website regularly! Feeling thirsty? Take a trip to Whalebone Brewing Company to taste a local brew and cusine.

Retrace your tracks back to Perth and relax after your road trip at one of the beautiful beaches in Perth including Cottesloe, Scarborough and Fremantle to name a few.


This top drive was provided by Tourism Western Australia. 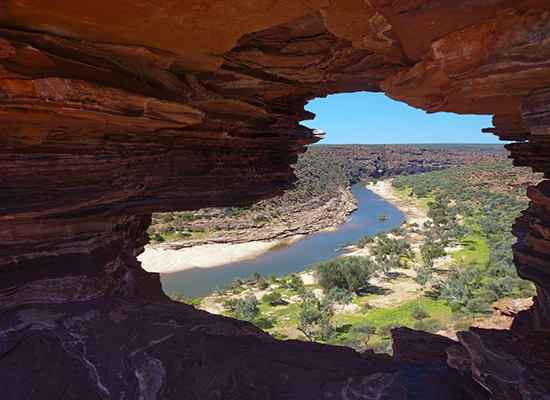 If you would like to book car hire or motorhome rental in Australia, simply use our online booking engine above or contact our friendly reservations staff.