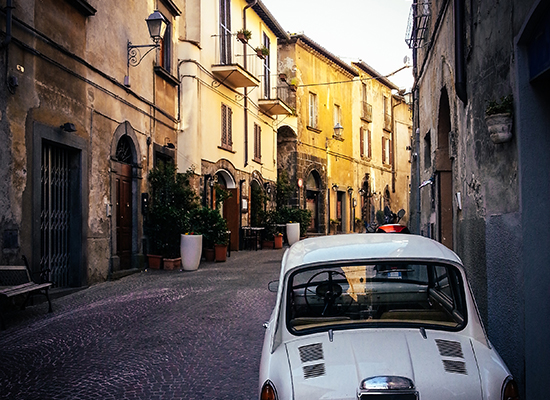 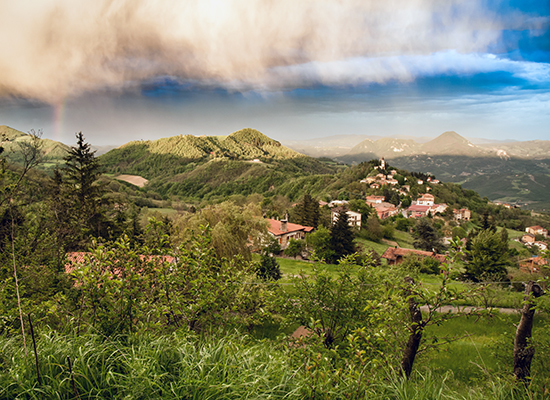 A celebration of all things truffle | 45 minutes drive, 32 kilometres

This road trip can be seen on Channel 9's Travel Guides, where we supplied the travellers with Fiats to drive around in.

It’s often argued, and most Italians agree, that the Emilia Romagna region of Italy is the gastronomic capital of the country. With the best time to visit this region during the autumn harvest (September, October & November), as most of the peak season crowds have left and the weather is generally cooler. Grapes are at their peak and being harvested to be transformed into fine Italian wine and there's an abundance of the region's most sought out culinary superstars — notably, porcini mushrooms and white truffles.

An easy 45-minute drive south-west of Bologna, in the picturesque hills of the Emilia Romagna region, lies the small Italian town, Savigno. Situated on the banks of the Samoggia River, Savigno is an obligatory stop for lovers of delectable food, farm to table cooking and everything ‘truffle’. The truffle is the most typical food feature of the town, and it has even been given the title, "City of Truffles".

There are many restaurants and shops offering the coveted fungus in an infinite number of culinary versions, but the real highlight takes place in November. In the first three weekends of November, Savigno hosts the traditional "Savigno and Colli Bolognesi National White Truffle Fair". The whole town buzzes with excitement as a huge number of gastronomic, cultural, and recreational experiences are on offer.

But it's not just all about the truffle! There are other highlights worth noting, starting with the town centre. The Church of San Matteo, built in the 18th century, stands next to a sandstone obelisk commemorating the revolt on the 15th August 1843. On this day, hundreds of patriotic followers of Giuseppe Mazzini rose up for the freedom of Italy from Papal control.

The territory of Savigno is one of the most beautiful in the region, offering visitors an undulating landscape of green hills and flowering fields - rich in walking trails, churches, chapels and ancient water mills. Some of the mills are still in perfect working order, including the 17th-century Mulino del Dottore in Rodiano, open to the public on Sunday afternoon. For nature lovers, there is the 20-kilometre long Percorso Sette Chiese (The Seven-Church Trail). The trail starts and finishes at the town square, crossing woodlands, fields and cherry orchards. It can be enjoyed on a mountain bike, horseback or on foot.

Catch the Travel Guides gang zip around Bologna and Savigno.