Belfast and the Causeway Coast have just been announced as the top region in Lonely Planet’s ‘Best in Travel’ 2018. This scenic drive is rated one of the top 5 drives in the world and you’re about to find out why.

Running from Belfast Lough to Londonderry, the road will take you through an incredible mosaic of fishing villages, quiet beaches, rugged coastlines, mountains and remarkable scenery.

Day 1
Leave Belfast and join the Causeway Coastal Route at Newtownabbey. Enjoy the view of Belfast Lough to the right as you head further west toward the seaside town of Carrickfergus, home to a well-preserved 12th century Norman Castle. Drive on through Kilroot and to Larne, the gateway to the beautiful Glens of Antrim, and follow the Antrim Coast Road where the road winds between 100 metre-high cliffs on one side and the sea on the other. Take time to explore any of the nine glens, particularly Glenarm with its historic walled garden and glistening harbor. Stop for the night in Cushendun at a local bed and breakfast. The town is a lovely spot to grab a pint and settle down for the night.

Day 2
Jump back into the car and stop at Torr Head, where you can see all the way across the Irish Sea to the Mull of Kintyre in Scotland. Keep driving along to Ballintoy where Game of Thrones fans will be pleased to learn is where the Iron Islands were filmed. Swallow your fear and walk across the 30-metre above sea ‘Carrick-a-Rede’ Rope Bridge, also located here.

If you veer inland you can sip on a dram from the world’s oldest licensed distillery in the village of Bushmills. Old Bushmills Distillery started manufacturing after a grant from King James 1 in 1608. The village of Bushmills is also nearby to the ruins of Dunluce Castle, also used in Game of Thrones as Pyke, the great house of the Greyjoys. After some whiskey tasting head back to the coast, where it’s time to see the UNESCO World Heritage-listed site of the Giant’s Causeway. These are the 40,000 interlocking basalt columns that, according to local folklore were created by legendary giant Finn McCool as a causeway to Scotland.

Come back to Bushmills to stay the night, there are lots of options for accommodation here.

Day 3
Wake up and have a lazy breakfast at the Copper Kettle, then drive through the lovely seaside villages of Portrush and Portstewart. Visit Mussenden Temple, originally built as a summer library in 1785. Take a walk on the remote beaches of Benone or Downhill. You can then drive through the emerald-hued Roe Valley, through Limavady and on to Derry (Londonderry), which is the only completely walled city in the British Isles.

Derry is the second-largest city in Northern Ireland and has a rich history, dating back to the 6th century. The city’s name means ‘oak grove’ which is fitting considering oak trees can grow over 1000 years old.

Visit the Free Derry Corner, a historical landmark commemorating Derry’s time as an independent nationalist area in the early 70s. Nearby you can also visit the museum of Free Derry and the Bloody Sunday monument which marks one of Derry’s saddest and most defining moments.

Besides Derry’s history, there are lots of new bars, breweries and restaurants popping up, thanks to the youthful energy of young entrepreneurs and new inhabitants in the city. 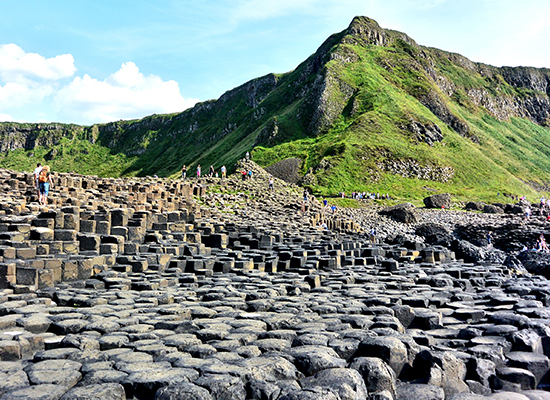 If you would like to book car hire in Ireland, simply use our online booking engine above or contact our friendly reservations staff.